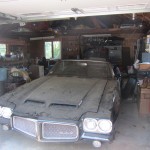 This is an odd but true tale of a desirable muscle car, a drunk ex-husband and an innocent buyer. A few weeks ago I connected with a client who was in the market for a convertible muscle car. For the sake of this story we’ll call him Jeff.  Jeff retained my services for a full on Classic Car Pre Purchase Appraisal and Buyers Consultation to help him acquire his first collector vehicle with confidence.

Jeff and I spent some time determining what he really wanted out of a classic car.  Definitely a drop top, obviously a V8, 68-72 GM body, ready to drive and most importantly, it had to be under $8,000 and it should be local to prevent travel expenses.  “I’d love to have a 442 or GTO” Jeff told me.  After picking my jaw up off the ground I was tempted to bring Jeff down to earth after considering his price range. I didn’t though, I decided to zip my lip and do some digging to see what I could find before shooting myself in the foot.

I scoured the web only to find a handful of cars that only partially fulfilled my customers request. I got lucky though and one of the first few cars I sent to Jeff to review was this dusty and somewhat neglected looking 1972 Lemans convertible, automatic with an original “blueprinted” 400 motor, new SS dual exhaust and a new top .  The car was cloned to be a ’71 GTO, Black on Black. After a careful review of the sellers ad and the not so great pictures I knew we had a car to look at. I could tell the car had factory A/C, the Ram Air hood and a new top. Well worth the ride for the $6,500 asking price.

After contacting the seller for a viewing Jeff, his wife Mary, and I took a ride over to Bridgewater to see this suspicious car. We had so many questions, Does it run? Is it in need of any frame repairs? Hows the interior? Why would it not be cleaned up to sell?  Something just felt off about this thing and my years of experience in the car business was telling me so. That’s when I learned about the divorce…yup, one of those.  Now it starts to get interesting.

Upon arriving at the residence we see the lopsided GTO wannabe in the garage, covered in dust pictured here just as we found it. 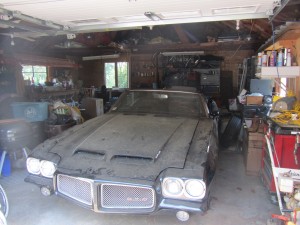 First I had a list of burning questions for the ex-wife.

“So, whats the story here? Are you divorced and selling off the assets?” She replied with a “well…no not really, kinda. We’re separated” There goes the red flag, its funny how the story continues to change.

“Does your husband know you are selling it for him” “Pffft, Oh Gawd ya” she scoffed.

“Is it in your name?” “Um..No, it’s in my husbands name, but he signed it” As I try to refrain from showing signs of laughter and disbelief I then asked her to retrieve the title so I could take a look. Meanwhile I unloaded my tools and creeper and proceeded to inspect and appraise the car.

After about 30 to 45 minutes of inspecting and discussing the car I determined that the rust free frame, damn near mint black interior, new top, fairly clean engine bay, decent paint work and correct “clone” attributes made this car a good deal if we could knock a bit off the price. I found a fat folder filled with work receipts from the last few years. A couple grand for the custom stereo, new center console, new suspension components and all the work to the rebuilt and blue printed motor were in there. The down side is the car has about 4 inches of dust on it, the power top motor is shot, there was a small spot of rust in the lower rear quarter, it needs one door handle and the killer is that it hadn’t run in over a year. Even with all those signs of neglect I still felt this was a good car. With a little elbow grease and a small amount if cash, this car will increase in value even as a driver, despite the clone status. The photos below are just as she sat for over a year. Click on any of the below pictures for a full size few. I can’t believe she didn’t even bother to wash the car. 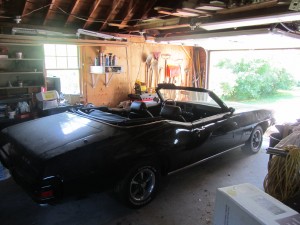 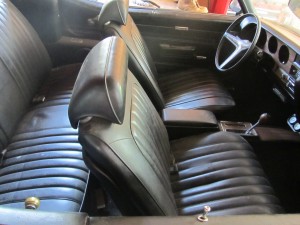 The details as to why this thing was just mysteriously parked were shady at best. All I heard was something about him getting hurt, out of work, blah blah blah, I gave up listening to this liar. She also told us that the $6,500 asking price was a mistake and promptly changed it to $8,500 after a family member had scolded her for offering the car for too little. Here we go with the BS.

We did have a few things working in our favor that day though. One of them was patience, the other was a fist full of cold hard cash. Ole’ Girl comes out of the house with the title and I gotta tell you, if her husband actually signed that thing, he has to have the most controlled and easily read signatures for a man…ever. I had to ask her one more time, “Are you for real? He really knows you are selling his car?” She didn’ seem quite as comfortable and pretended to shuffle the maintenance history paperwork around and pretty much sidestepped the question with a mumbled “what?..oh…ya, yup”

Jeff and little miss “pants on fire” shook hands on a figure, she couldn’t resist the cash after turning down deposit and pay by check deals. After a long time of hearing her sob story repeatedly, she eventually convinced us that she had the rights to sell the car for him, that he was sick and couldn’t be here to facilitate the sale. What can you do?  Jeff wanted this car pretty bad so we took a shot and kept moving forward. She took some time to draw up the Bill of Sale while we waited out in the driveway, calling  AAA for a tow.

While waiting near the sad little car I looked out to the street for no particular reason just as an older, gruff looking fellow driving a ratted out S-10 pick up drove by. He slowed way down and gawked at me like he was shocked to see someone standing in this driveway. That’s a bit odd don’t you think?

Not even 10 minutes after that old crustacean does his drive by, who pulls in the driveway? You guessed it. The drunk soon to be ex-husband, and he was pissed. He doesn’t look sick, injured or unable to do paper work. He stumbled out of his late model Chevy work van, tripping over his boots with a face so mean looking, it would have scared a pitbull off into the woods. “You fuckin’ bitch, YOU FUCKIN’ BITCH!” I couldn’t help but chuckle, “Tommy Two Times” was over here sizing up the situation, he gets right up in my clients face with his booze breath and starts right in with the ever famous “YOU GOTTA PROBLEM’? HUH?

Remember how the story keeps changing with this lady? So “Joey Bag-O-Donuts” leads Jeff over to a quiet section of the yard for a little chat. I thought they were going to go to blows but it turns out sucking on long neck Bud Lights all afternoon makes some people a bit of a softy. This guy pulls a Richard Simmons on my client and ends up balling his eyes out. No shortage of drama around here, that’s for sure.  After he gains a bit of dignity back we all gathered in the driveway so the ex-husband, who is on a restraining order from this woman by the way, could yell scream and belittle the ex-wife one more time before signing the bill of sale. When he finally asked who the hell I was he screamed “FUCK YOU” right in my face before I could even finish my first name. I couldn’t take it anymore, I burst out laughing at him while his ex scolded him for being so rude. “Oh he knows I’m all right” he fired back and he left me alone after that.  This whole time the AAA driver is watching this thing go down claiming that he was going to leave, but we got the deal done. The drunkard lost his car and his dignity, gained half of the sale price and got out before the cops showed up thanks to his little fat buddy in the s-10. I can’t say I blame the guy, he’s losing his family, his house and his prized posession, I’d be drunk and pissed too.

The GTO made it to its new home on the south shore and was diagnosed as needing some brakes which we expected and a bit of a tune up.  It’s on the road and sounds fantastic, “Jeff” and his family are enjoying the car and we were actually pleased to experience the Jerry Springer effect on this one as we knew we wouldn’t have to worry about that guy anymore. Here she is after a much needed bath at her new home. 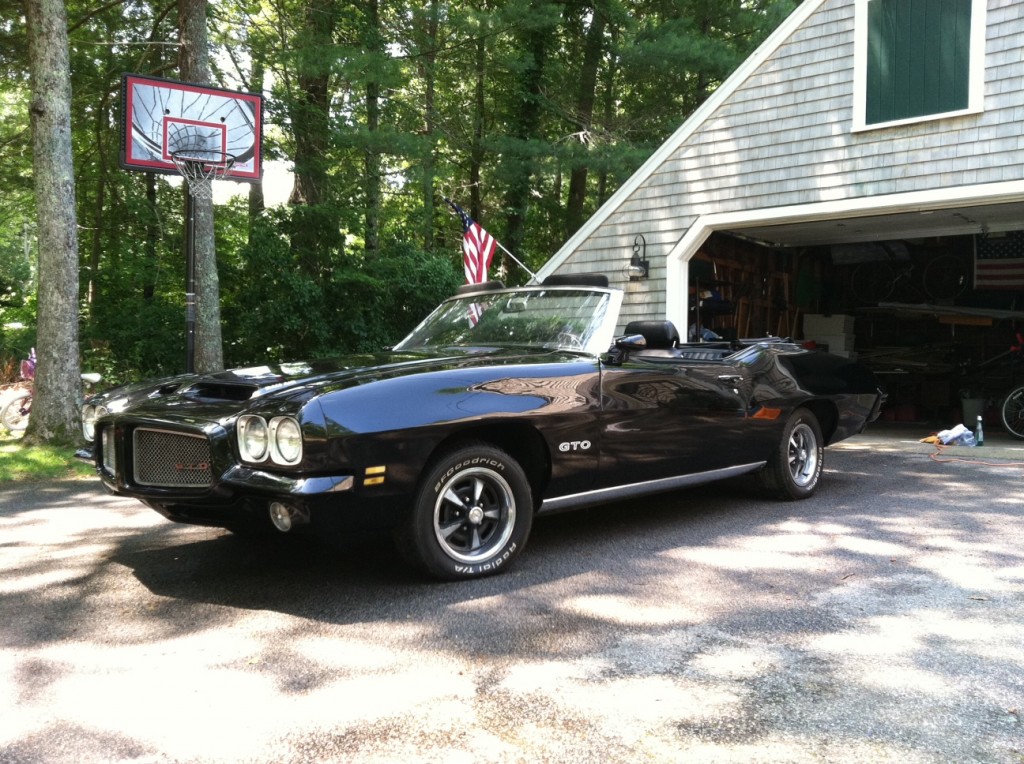 So fresh and So Clean, This neglected GTO clone is rumbling like a train and back on the road.

If you or anyone you know is interested in purchasing a vehicle and need some purchasing or selling assistance like I did here for Jeff, let me know. I can provide Pre Purchase Appraisals , negotiating assistance and buyer/seller broker services on classics, late model pre-owned cars and new cars.

7 Responses to “A Buyer’s True Tale: The GTO Clone Fiasco”